Home
Science
No, You’re Not Left-Brained or Right-Brained
Prev Article Next Article

At the fictional Hogwarts school for witchcraft and wizardry in
the Harry Potter series, students are sorted into different
school houses by a magic hat based on their personalities.
Similarly, in elementary school, a teacher may have declared
one side of your brain stronger than the other based
on your personality. If you’re a creative or artistic
type, you would have been identified as right-brained. If
you’re an analytical or mathematical type, you would have been
identified as left-brained.

You might have even used this picture of your brain to choose a
college or a career. And while we each have a unique set
of talents and abilities, there’s no such thing as
right-brained or left-brained.

Not in the way your school teacher explained it to you, anyway.
And if there were such a thing, almost all of us would be
left-brained. The left cerebral hemisphere controls the right
side of the body, and about 90 percent of people prefer to write
with their right hand, indicating left brain motor dominance.
Moreover, language skills are left lateralized, or largely
controlled by the left hemisphere, in over 90 percent of
people. That includes 78 percent of people who are not right-handed.

Does this mean that the remaining few with language in the
right hemisphere are “right-brained?” More likely, these
individuals have, on balance, the same skills and talents as
the other 90 percent of us “left-brained” folks. The place in
the brain where language is localized just happens to be
different.

The left cerebral hemisphere is to the “right-brained” poet or
novelist as the hamstrings and quadriceps are to a competitive
sprinter. Because the ability to understand and produce
language is focused in the left side of the brain in almost
everyone, caricaturing these creative types as using
their right brain more than their left brain is
silly.

Similarly, visual-spatial abilities—localized to the right
cerebral hemisphere—are skills that are absolutely critical for
“left-brained” talents like science or engineering. The ability
to interpret algebraic equations in terms of geometric curves
is the specialty of the right brain.

So where did this right-left dichotomy come from? As mentioned
above, some skills are indeed strongly lateralized to one
hemisphere of the brain. But much of our obsession with the
brain’s left and right cerebral hemispheres may have started
with studies of split brain patients in the ‘50s. During this
time, people who suffered multiple seizures a day underwent
intense surgery to treat their epilepsy. 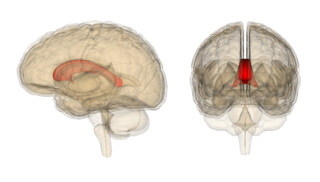 The corpus callosum in red.

To calm the electrical storms that ravaged these patients’
brains, the nerve fibers connecting the left and right
hemispheres of the brain were cut. These fibers are
collectively known as the corpus callosum. As a once bright
highway of information goes quiet, consciousness changes in
profound ways, and the specialties of each cerebral hemisphere
are more easily disentangled.

Once the corpus callosum is severed on the operating table, the
new split brain patient appears astonishingly normal at first
glance. But careful experiments reveal that this person is
really two persons, two streams of consciousness in one body.
These experiments, performed by Nobel laureate
Roger Sperry, found clever ways of feeding information to only
one side of the body (and, therefore, only the cerebral
hemisphere controlling that side of the body). 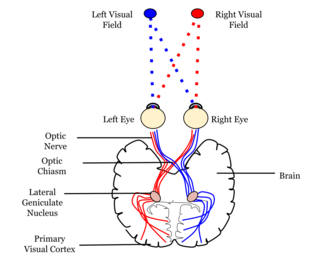 Neuroscientists may exploit the physiology of the visual
system to selectively show information to only one
hemisphere of the brain.

Why did the left hemisphere give this answer? Not being able to
see the snow scene, the left hemisphere doesn’t know that the
shovel was selected to shovel snow. Thus, this separate stream
of consciousness invents a new reason involving the chicken
scene that it can see.

The right hemisphere cannot speak, but it can point to words
like “yes” or “no” to answer a question.
Neurologist V. S. Ramachandran tells an anecdote
of a split brain patient asked whether he believed in God. The
right hemisphere pointed to “yes” while the left hemisphere
declared “no.” Each hemisphere, it seems, maintains independent
beliefs and personalities, challenging the notion that we are
each an indivisible “self.”

But this does not justify the pop psychology concept of
“left-brained” or “right-brained.” The two hemispheres are
different, yet brain imaging technologies like functional
magnetic resonance imaging (fMRI) suggest that, on average, we
use both sides of our brain equally. We are all
“brain-ambidextrous.”

If ever there were a left-brained and a right-brained person,
it would be the two personalities cohabiting the skull of a
split brain patient. For the rest of us, these labels are as
fictional as Harry Potter.

Oh, and that thing about only using ten percent of your brain?
You can throw that one in the garbage, too.

This post also appeared on Knowing Neurons and was the script for
a video collaboration between
Joel
Frohlich and the Youtube
channel Professor
Dave Explains.